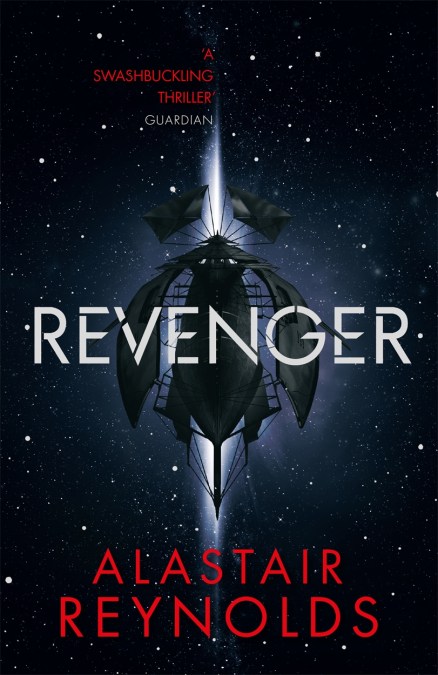 by Alastair Reynolds
The galaxy has seen great empires rise and fall. Planets have shattered and been remade. Amongst the ruins of alien civilisations, building our own from the rubble, humanity still thrives.

And there are vast fortunes to be made, if you know where to find them . . .

Captain Rackamore and his crew do. It’s their business to find the tiny, enigmatic worlds which have been hidden away, booby-trapped, surrounded with layers of protection – and to crack them open for the ancient relics and barely-remembered technologies inside. But while they ply their risky trade with integrity, not everyone is so scrupulous.

Adrana and Fura Ness are the newest members of Rackamore’s crew, signed on to save their family from bankruptcy. Only Rackamore has enemies, and there might be more waiting for them in space than adventure and fortune: the fabled and feared Bosa Sennen in particular.

Revenger is a science fiction adventure story set in the rubble of our solar system in the dark, distant future – a tale of space pirates, buried treasure and phantom weapons, of unspeakable hazards and single-minded heroism . . . and of vengeance . . . 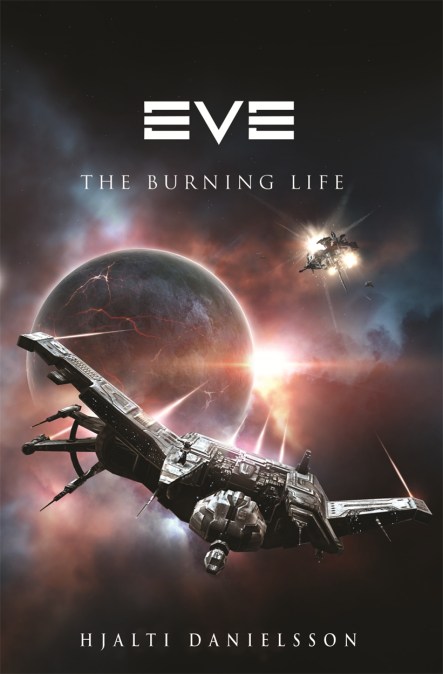 by Hjalti Danielsson
The capsuleers are the immortal pilots that string together the vast Interglactic empire that makes up the universe of EVE. Remote from the mortal population they have come from they are cold and distant. They are needed but hated.

Drem has reason to hate them – a capsuleer attack on the pirate space colony he worked in killed his family. Ralea hates them too. But her hatred is for herself as well. She worked as an agent for capsuleers acquiring missions for capsuleer agents and taking a cut from the profits. Missions that lead to countless people dying.

Drem seeks revenge, Ralea, redemption. The key to their futures lies with the sisters of Eve, a philanthropic rescue organisation who span the known worlds. But how do you revenge yourself against an immortal? Where can you find redemption if you have killed thousands? Drem and Ralea will find that their quests are intertwined and that they will lead to an unexpected place.

EVE: THE BURNING LIFE is a fast moving space opera: a tale of revenge and redemption that spans the Universe. 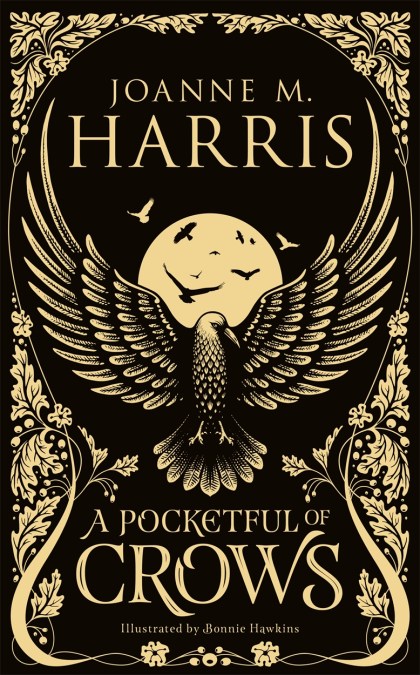 A Pocketful of Crows

So begins a beautiful tale of love, loss and revenge. Following the seasons, A Pocketful of Crows balances youth and age, wisdom and passion and draws on nature and folklore to weave a stunning modern mythology around a nameless wild girl.

Only love could draw her into the world of named, tamed things. And it seems only revenge will be powerful enough to let her escape.

Beautifully illustrated by Bonnie Helen Hawkins, this is a stunning and original modern fairytale. 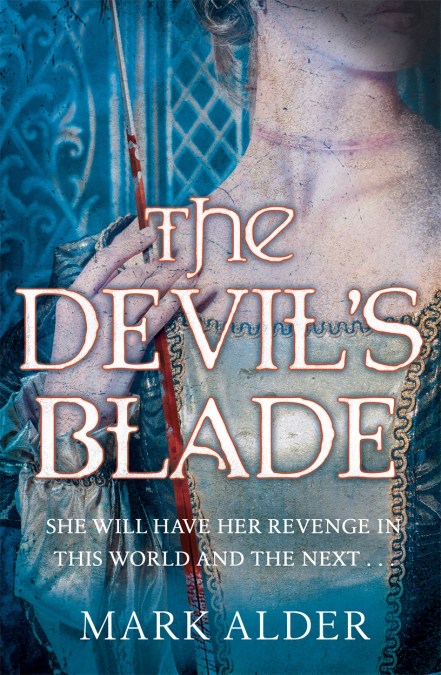 by Mark Alder
The story of Julie D’Aubigny is well known. Her tumultuous childhood, her powerful lovers, her celebrated voice. Connected to most of the nobility of 17th century Paris, feted for her performance, unwilling to live by the rules of her society, she took female lovers, fought duels with noblemen and fled from city to country and back again.

But now the real truth can be told. She also made a deal with the devil. He gave her no powers or help, but he kept her alive for only one reason. To take revenge… 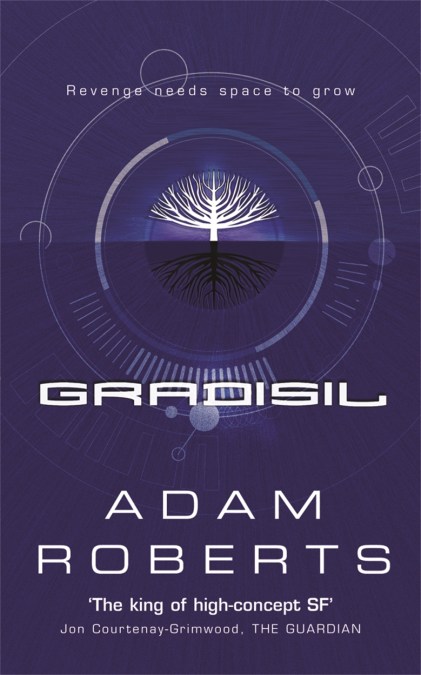 by Adam Roberts
Gradisil is a multi-generational story of murder, betrayal and revenge. It is told through the eyes of three characters and against a background where mankinds rush into space has faded away leaving individual pioneers to force their way independently into space after the collapse of the big government space agencies.

They ride up into space on the lines of electromagnetic force that flower into space from earth like the mighty Yggradisil – the earth tree of Norse myth. Leaving their weight behind they still carry a cargo of enmities and hatreds.

Roberts has a unique approach to SF and is one of the genre’s premier stylists. This is one of his most original novels yet. 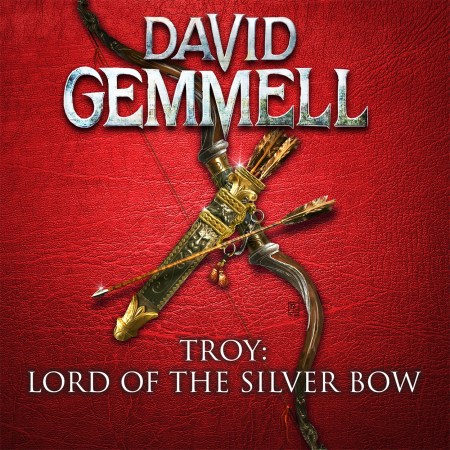 Troy: Lord of the Silver Bow

Read by Thomas Judd by David Gemmell
Three lives will change the destiny of nations.

Helikaon, the young prince of Dardania, haunted by a scarred and traumatic childhood. The priestess Andromache, whose fiery spirit and fierce independence threatens the might of kings. And the legendary warrior Argurios, cloaked in loneliness and driven only by thoughts of revenge.

In Troy they find a city torn apart by destructive rivalries – a maelstrom of jealousy, deceit and murderous treachery. And beyond its fabled walls blood-hungry enemies eye its riches and plot its downfall.

It is a time of bravery and betrayal; a time of bloodshed and fear. A time for heroes. 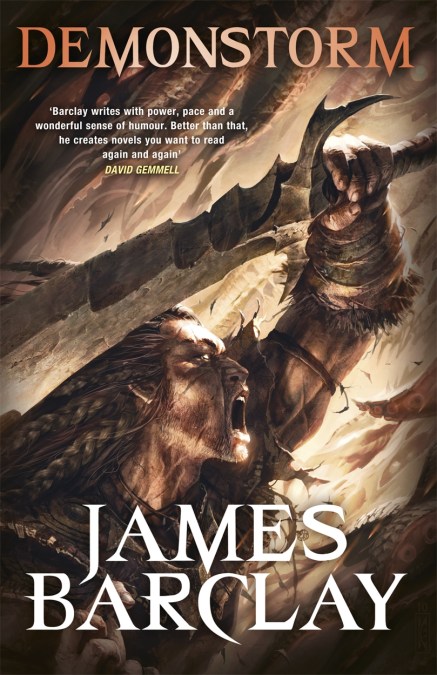 by James Barclay
Legends of the Raven: Three

The Raven have kept their promises, but fate has not finished with them. As the war between the colleges of magic rages on, one man sees his chance for revenge. Balaia is already in flames … as Tessaya, Lord of the Paleon Tribes, unleashes his horde on the Dark Colleges.

Dystran, Lord of the Mount, faces certain defeat at Tessaya’s hands. He may be cornered and desperate, but he refuses to be beaten; so he turns the unthinkable power of his dimensional magic on his enemies…and tears the veil between the realms, allowing a vast, predatory even to catch the sent of the countless souls of Balaia. It’s possible not even The Raven can save them now … 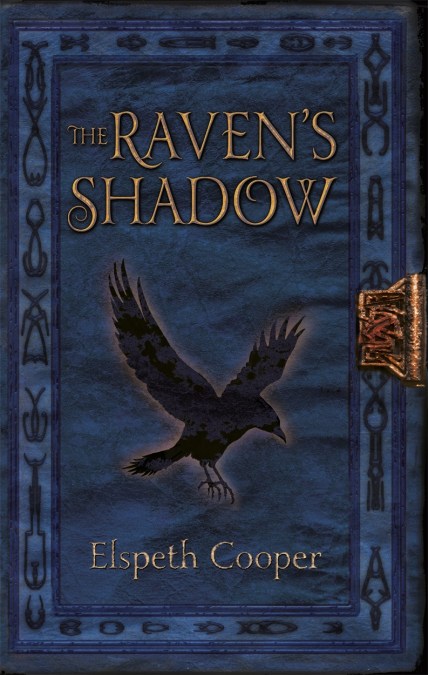 by Elspeth Cooper
Sometimes those with the greatest potential must withstand the hardest blows.

Fate, it seems, has nothing kind in store for Gair. First his lover and now his mentor have been killed – the first by the dangerous, ambitious Savin, the second in a revolutionary uprising. Alone, and with even his magical abilities betraying him, he has only one goal left: revenge.

Far to the north, if Teia has one goal it is survival. Attempting to cross a high mountain pass in the teeth of winter is an act of desperation, but the message she carries cannot wait for spring. An invasion force is gathering behind her, and only an ancient order of knights can hold them back.

The danger is real, there are enemies in the shadows, and time is running out … 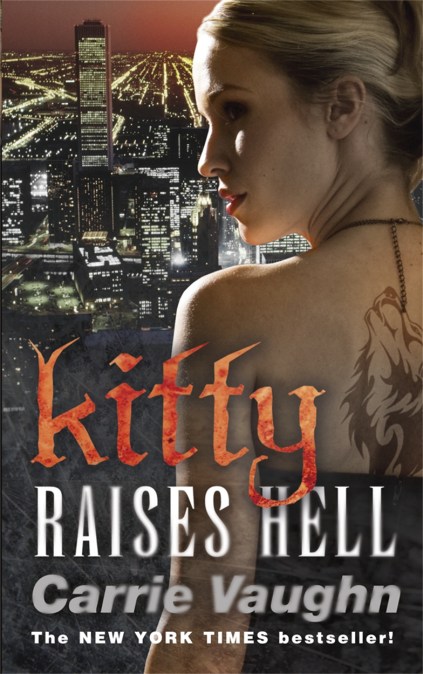 by Carrie Vaughn
TOO DARN HOT! Kitty and Ben return – and this time they’re fighting for their lives!

Kitty and Ben thought they were done with Las Vegas, but it’s beginning to looks like Vegas isn’t done with them. A sadistic cult of lycanthropes and their vampire priestess have laid a curse on Kitty, revenge for her disrupting their rituals, and now an invisible evil that smells like brimstone and plays with fire has followed them home. The next full moon triggers danger and destruction in the form of fire, and it’s not just targeting Kitty, but the pack of werewolves she’s sworn to protect.

Kitty needs help if she’s going to be able to extinguish the terror that’s threatening to torch them all! 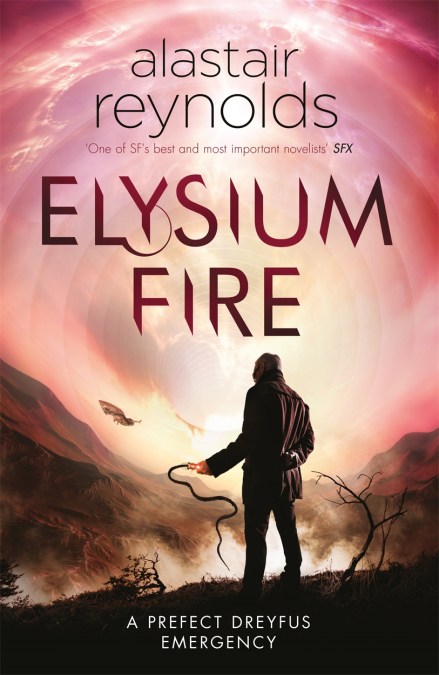 by Alastair Reynolds
Featuring Inspector Dreyfus – one of Alastair Reynolds most popular characters – this is a fast paced SF crime story, combining a futuristic setting with a gripping tale of technology, revolution and revenge.

One citizen died a fortnight ago. Two a week ago. Four died yesterday . . . and unless the cause can be found – and stopped – within the next four months, everyone will be dead. For the Prefects, the hunt for a silent, hidden killer is on . . .

Alastair Reynolds has returned to the world of The Prefect for this stand-alone SF mystery in which no one is safe. The technological implants which connect every citizen to each other have become murder weapons, and no one knows who or what the killer is – or who the next targets will be. But their reach is spreading, and time is not on the Prefects’ side. 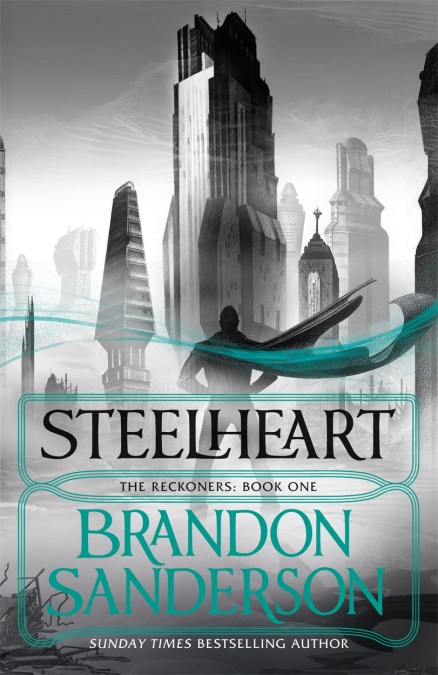 by Brandon Sanderson
Ten years ago, Calamity came. It was a burst in the sky that gave ordinary men and women extraordinary powers. The awed public started calling them Epics. But Epics are no friend of man. With incredible gifts came the desire to rule. And to rule man you must crush his wills.

Nobody fights the Epics… nobody but the Reckoners. A shadowy group of ordinary humans, they spend their lives studying Epics, finding their weaknesses, and then assassinating them.

And David wants in. He wants Steelheart – the Epic who is said to be invincible. The Epic who killed David’s father. For years, like the Reckoners, David’s been studying, and planning – and he has something they need. Not an object, but an experience. 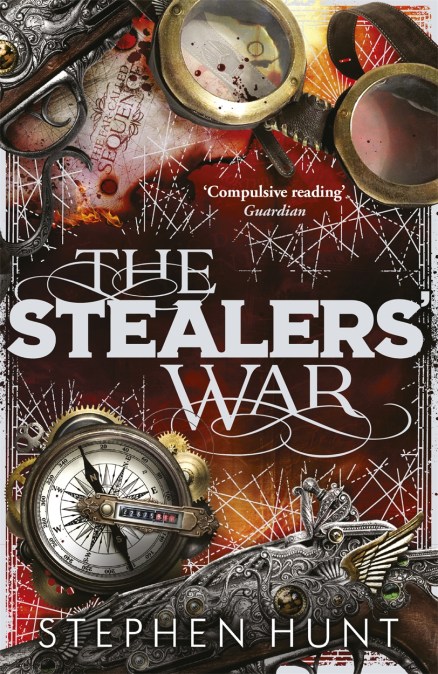 by Stephen Hunt
Weyland has been at war. Invaded by a technologically advanced enemy, the cities sacked, and what fragile peace remained torn apart by a civil war.

All anyone should want is a return to peace.

But Jacob Carneham still wants his revenge; and if he can lure the invaders into the mountain he can have it. He can kill them all.

If he does, there may never be peace again.

If he doesn’t, Weyland will never be free of the threat of invasion.

The northern horse lords are planning an attack. A future Empress is fighting to save her daughter. Jacob’s son is trying to restore peace and stability to Weyland, alongside the rightful King. And behind it all is a greater struggle, which may spell the end for them all . . . 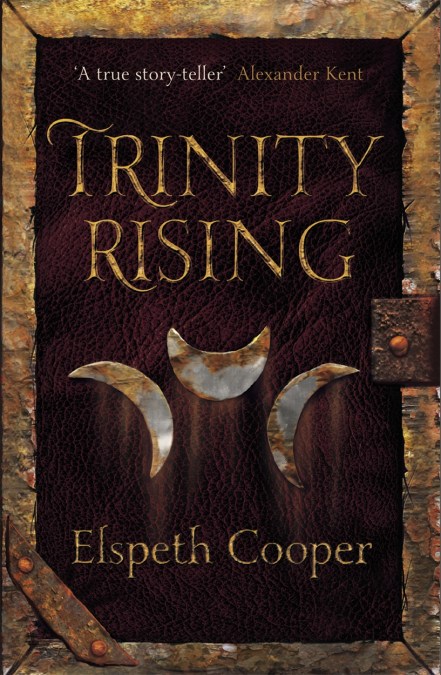 by Elspeth Cooper
The future holds nothing but blood and death …

… and Teia fears there is nothing she can do about it. Her clan is riding to war, but her secret, untrained gift of foretelling has shown her they are riding to their doom. If she cannot turn them from their course, her only hope of saving them will be to betray them to their sworn enemies.

Gair is mourning his past …

… but there is no time to dwell on his grief or hunger for revenge. Pursuing an artefact from the Founding Wars, he travels deep into the hostile southern deserts. As religious tensions erupt into bloody violence around him, he must make an impossible choice: save innocent lives or sacrifice them in the hope that thousands more can be saved later.

And all the while, his grip on his powers is failing. 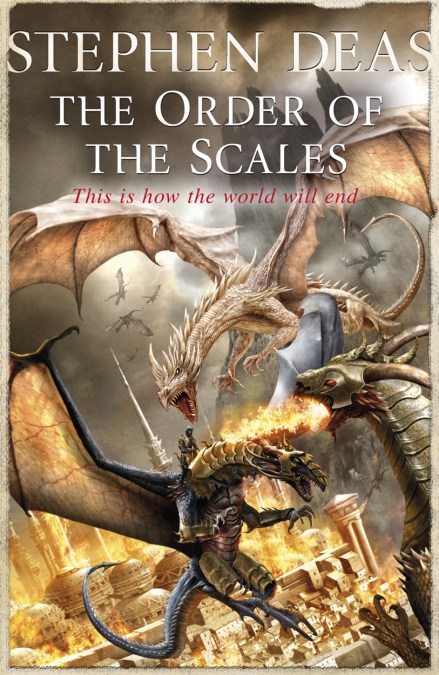 The Order of the Scales

by Stephen Deas
Noted for its blistering pace, awesome dragons and devious politicking Stephen Deas’ landmark fantasy trilogy moves to a terrifying epic conclusion in The Order of the Scales. Perfect for all fans of Anne McCaffrey’s Dragonriders of Pern series

As the various factions fight for control of the Adamantine Palace, mankind’s nemesis approaches. The realm’s dragons are awakening from their alchemical sedation and returning to their native fury. They can remember why they were created and they now know what mankind has done to them. And their revenge will be brutal.

As hundreds of dragons threaten a fiery apocalypse only the Adamantine Guard stand between humanity and extinction. Can Prince Jehal fight off the people who want him dead and unite their armies in one final battle for survival? 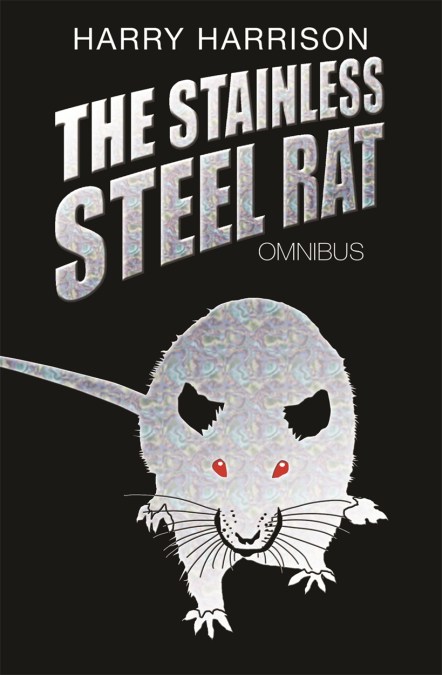 Meet Slippy Jim, aka The Stainless Steel Rat, aka James Bolivar DiGritz. A man of many names and many talents … all of which add up to make one of the greatest con men of all time.

Charming, quick-witted, physically fit, a master of disguise, a skilled liar, an accomplished bank robber and exceptionally talented at breaking and entering, he’s everything a master thief should be. He’s also about to be caught, turned, and sent back out onto the streets as part of the Special Corps.