It’s mmp publication day, and today we have one of the Financial Times’ best books of 2017 for your delight, entertainment, and enjoyment, by none other than C. Robert Cargill, acclaimed screenwriter of Marvel’s Doctor Strange! 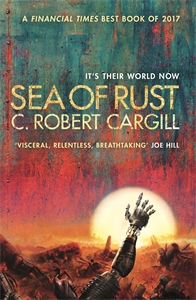 Humankind is extinct. Wiped out in a global uprising by the very machines made to serve them. Now the world is controlled by One World Intelligences – vast mainframes that have assimilated the minds of millions of robots.

But not all robots are willing to cede their individuality, and Brittle – a loner and scavenger, focused solely on survival – is one of the holdouts.

Only, individuality comes at a price, and after a near-deadly encounter with another AI, Brittle is forced to seek sanctuary. Not easy when an OWI has decided to lay siege to the nearest safe city.

Critically damaged, Brittle has to hold it together long enough to find the essential rare parts to make repairs – but as a robot’s CPU gradually deteriorates, all their old memories resurface. For Brittle, that means one haunting memory in particular . . .

Sea of Rust boldly imagines a future in which no hope should remain, and yet a humanlike AI strives to find purpose among the ruins.

Here’s what people have had to say about Sea of Rust:

Sea of Rust is a 40-megaton cruise missile of a novel – it’ll blow you away and lay waste to your heart. It is the most visceral, relentless, breathtaking work of SF in any medium since Mad Max: Fury Road’ Joe Hill, Sunday Times bestselling author

‘Like an AI-centred, desert-bound twist on Children of Men, this is a sensitive and smart novel that surprises you with its depth of feeling’ SciFiNow

‘Sea of Rust is modern, smart fiction that belies its majesty with a light tough. One of the science fiction books you should read this year’ SF Book

‘An action-packed post-apocalyptic thriller . . . [that] also addresses issues of soul and sentience in a subtle yet profound way’ Financial Times (Best Books of 2017)

‘A soulful and stunningly accomplished work of science fiction . . . a stone-cold stunner of a story that deals with death and darkness yet is leavened with light and life’ Niall Alenander, Tor.com

Get this fantastic book now in paperback and eBook!