Another paperback publication day rolls around, and today we have a triptych of treats for you! Scroll on down to check out today’s horde of fantasy and science fiction gold.

An impossible murder. A ticking deadline. A political coup. A Hitchcockian thriller set in a chilling near future. 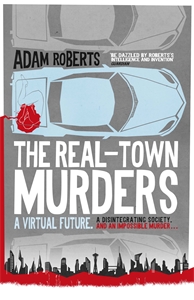 Alma is a private detective in a near-future England, a country desperately trying to tempt people away from the delights of Shine, the immersive successor to the internet. But most people are happy to spend their lives plugged in, and the country is decaying.

Alma’s partner is ill, and has to be treated without fail every 4 hours, a task that only Alma can do. If she misses the 5 minute window her lover will die. She is one of the few not to access the Shine.

So when Alma is called to an automated car factory to be shown an impossible death and finds herself caught up in a political coup, she knows that getting too deep may leave her unable to get home.

What follows is a fast-paced Hitchcockian thriller as Alma evades arrest, digs into the conspiracy, and tries to work out how on earth a dead body appeared in the boot of a freshly-made car in a fully-automated factory.

‘The kind of elegantly playful fun at which Roberts, almost routinely it seems, excels’ SFX Magazine

‘This is witty, smart, cleverly structured and, like the master’s finest films, hooks the reader from the opening moments and never lets go. Dial M for Marvelous’ Starburst Magazine

‘As ever, Roberts’s use of the genre to explicate ideas – the allure of virtual reality and the consequent aff ectless society – is done with grace and economy, and what might have been a grim read is leavened by moments of irreverent black humour’ Guardian

The Real-Town Murders is available now in mass market paperback, as well as eBook and audio download!

A gripping YA crossover series from a spectacular new voice in the genre for readers of Kristin Cashore, Sabaa Tahir and Victoria Aveyard

Destroyer. Death bringer. Dragon-slayer. I am more weapon than girl. 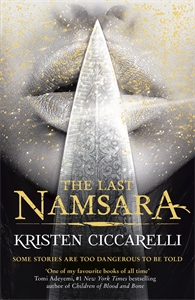 Asha is a dragon-slayer. Reviled by the very people she’s sworn to protect, she kills to atone for the wicked deed she committed as a child – one that almost destroyed her city, and left her with a terrible scar.

But protecting her father’s kingdom is a lonely destiny: no matter how many dragons she kills, her people still think she’s wicked.

So to unite the fractured kingdom, she must marry Jarek, her father’s cruel commandant. As the wedding day approaches, Asha longs for freedom.

Just when it seems her fate is sealed, the king offers her a way out: her freedom in exchange for the head of the most powerful dragon in Firgaard.

And the only person standing in her way is a defiant slave boy . . .

People have been absolutely raving about The Last Namsara!

‘The most simple thing I can say is this is the best book I have ever read and Kristen Ciccarelli is now my favorite author. Her story and her words have so much beauty, and love, and passion, and adventure. By the end I gasped every 5-10 pages and got goosebumps every 10-20 pages. There are not many books I would say this for, but pre-order this now because your soul has been waiting for a story this beautiful’ Tomi Adeyemi, author of Children of Blood and Bone

‘An accomplished fantasy novel . . . raised above the commonplace by one marvellous central premise – the idea that dragons are the custodians of the old tale, and that their fire is actually generated by the telling of stories – a premise that reads as an extended metaphor about imagination, stories and their power to change the world. It’s the first of a series. I’ll definitely be looking out for the next one’ Joanne Harris, author of Chocolat and The Gospel of Loki

‘It’s always refreshing to see a non-traditional fantasy setting. Add a kickass princess with something to prove, a dash of Arabian Nights story magic, plus dragons? Yes please!’ Elspeth Cooper, author of Songs of the Earth

Get your copy of this fabulous novel now in paperback, eBook and audio download.

A ‘Dirty Dozen’ or ‘Suicide Squad’ for lovers of ‘Aliens’, THE BASTARD LEGION series is a down and dirty military SF set in a world of mercenary actions and covert operations. 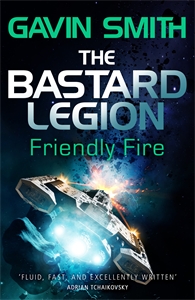 In FRIENDLY FIRE, the Bastard Legion are hired to pull off a daring power-armoured heist of propriety tech.

Getting the tech will be hard. Getting off the planet, deadly.

Four hundred years in the future, the most dangerous criminals are kept in suspended animation aboard prison ships and “rehabilitated” in a shared virtual reality environment. But Miska Storrow, a thief and hacker with a background in black ops, has stolen one of these ships, the Hangman’s Daughter, and made it her own. Controlled by explosive collars and trained in virtual reality by the electronic ghost of a dead marine sergeant, the thieves, gangsters, murderers, and worse are transformed into Miska’s own private indentured army: the Bastard Legion.

Check out what people have been saying about Gavin Smith:

‘The characters are well drawn, the action fluid, fast, and excellently written. Both books are cracking reads, and if spaceship level SF is your thing then you should probably snap up both’ Adrian Tchaikovsky

‘Gavin G Smith joined the ranks of ‘Masters of Military SciFi’ with his book The Bastard Legion, which took many of the preconceived notions of the ‘shooty death in space genre’ and turned them around’ Starburst

The Bastard Legion: Friendly Fire is available to buy now in eBook and mass market paperback!