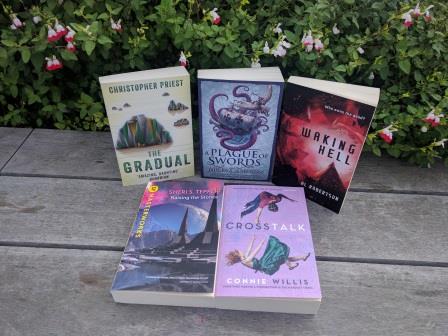 It’s publication day! And it’s a paperback publication day, so that means you gotta grab them all! We’ve got bloody, visceral knightly combat, a heart-warming near-future sf novel, a new masterwork of alien gods and new worlds, a poetic speculative masterpiece from one of the genre greats and a fascinating and exciting cyberpunk-esque exploration of space and the digital afterlife! Go on, dig in, you know you want to!

Crosstalk is a smart, brilliant and endearing romantic comedy comparable to Sliding Doors

Briddey is about to get exactly what she thinks she wants . . .

Briddey is a high-powered exec in the mobile phone industry, overseeing new products from concept (‘anything to beat the new apple phone’) to delivery. And she works with her wonderful partner, Trent. They’ve been together for six magical weeks, in a whirlwind of flowers, dinners, laughter and now comes the icing on the cake: not a weekend away or a proposal but something even better. An EDD. A procedure which will let them sense each other’s feelings. Trent doesn’t just want to tell her how much he loves her – he wants her to feel it.

The trouble is, Briddey can’t breathe a word of it to anyone (difficult, when the whole office is guessing) until she’s had two minutes to call her family. And they’re hounding her about the latest family drama, but when they find out about the EDD – which they will – they’ll drop everything to interrogate her. And it might just be easier to have the procedure now and explain later.

Only Apple are poised to deliver an amazing new product and she has to be one step ahead . . . if she can only persuade their tech genius, C. B., to drop his crazy ideas about a ‘privacy phone’ with its ‘do not disturb’ settings, and focus on what people really want: more efficient, instinctive and immediate ways to communicate.

The race is on: not just for new, cutting-edge technology, but also for a shred of privacy in a public world and – for Briddey – a chance for love at the heart of it all.

This is a brilliant, heart-warming romantic comedy from one of the wittiest and wisest of our authors. Written with a light touch and a smile, we’re swept up in Briddey’s romance – and into the difficulties of a world just one technological step away from our own, as technology and social media blur (or indeed remove) the line between personal and public.

‘It’s a book that feels fundamentally true; it is a book to live in’ WASHINGTON POST

Crosstalk is available now in paperback

A moving, compulsive science fiction novel from one of the best writers in the field

When the human settlers arrived on Hobbs Land, the native intelligent species, the Owlbrit, were already almost extinct. Before the last one died, a few years later, the humans had learned a little of their language, their ideas and their religion. It seemed the natural thing for the settlers to maintain the last Owlbrit temple, with the strange statue that was its God. When that God died – disintegrating overnight – it seemed equally natural to start preparing its replacement.

Maire Manone came to Hobbs Land to escape the harsh patriarchal religion of Voorstod, but Voorstod hasn’t forgotten her – or forgiven her. But the men who arrive on Hobbs Land to find and return Maire to her homeland haven’t taken Hobbs Land’s God into account …

‘In RAISING THE STONES, Sheri S. Tepper has outdone herself … secure in technique, incandescent in conception, and a profound insight, it is that rare thing – a book which makes the world we live in better than it was.’ STEPHEN R. DONALDSON

‘She takes the mental  risks that are the lifeblood of science fiction’ URSULA K. LE GUIN

Raising the Stones is available now in paperback

The Gradual by Christopher Priest

War, music and identity are explored and dissected in this powerful and affecting novel from one of the UK’s greatest authors.

In the latest novel from one of the UK’s greatest writers we return to the Dream Archipelago, a string of islands that no one can map or explain.

Alesandro Sussken is a composer, and we see his life as he grows up in a fascist state constantly at war with another equally faceless opponent. His brother is sent off to fight; his family is destroyed by grief. Occasionally Alesandro catches glimpses of islands in the far distance from the shore, and they feed into his music – music for which he is feted.

But all knowledge of the other islands is forbidden by the junta, until he is unexpectedly sent on a cultural tour. And what he discovers on his journey will change his perceptions of his country, his music and the ways of the islands themselves.

Playing with the lot of the creative mind, the rigours of living under war and the nature of time itself, this is Christopher Priest at his absolute best.

‘The Gradual is a captivating odyssey from a true visionary’ STARBURST

The Gradual is available now in paperback

Return to the world of Station in the sequel to the acclaimed Crashing Heaven.

Leila Fenech is dead. And so is her brother Dieter. But what’s really pissing her off is how he sold his afterlife as part of an insurance scam and left her to pick up the pieces. She wants him back so she can kick his backside from here to the Kuiper Belt.

Station is humanity’s last outpost. But this battle-scarred asteroid isn’t just for the living. It’s also where the dead live on as fetches: digital memories and scraps of personality gathered together and given life. Of a sort.

Leila won’t stop searching Station until she’s found her brother’s fetch – but the sinister Pressure Men are stalking her every move. Clearly Dieter’s got himself mixed up in something a whole lot darker than just some scam.

Digging deeper, Leila discovers there’s far more than her brother’s afterlife at stake. Could it be that humanity’s last outpost is on the brink of disaster? Is it too late for even the dead to save it?

Waking Hell is a sequel to Crashing Heaven, the novel that announced the arrival of this exciting new talent.

‘A brisk, twisty plot with plenty of intrigue will work for action fans as well as more philosophical readers who love to ponder big ideas’ PUBLISHERS WEEKLY