Happy Thursday! Have we got an exciting publication day for you! From out of this world SF to epic fantasy, we’ve got six thrilling new reads that need to be on your to be read pile.

The Belles – Dhonielle Clayton
Scott Westerfeld’s The Uglies meets Louise O’Neill’s Only Ever Yours, The Belles is a powerful, diverse crossover YA that will make you question the value we assign to beauty. It’s strikingly beautiful – stuffed full of gluttonously vivid descriptions that highlight the rotten core of a world obsessed with outward appearance.

In Orleans, the people are born grey and damned. Only the Belles are born beautiful – and only they have the power to make others beautiful too. They can shape your appearance into whatever you desire – if you can afford their services . . . and don’t mind the pain. Camellia is the Belle chosen to tend to the royal family, but she soon realises that there are dark secrets at the heart of her world. Why do some of her sisters now wear veils over their beautiful faces? What would really happen if she abused her powers? Can one person really make a difference when the world is so twisted?

And this really is the YA everyone is talking about:

‘Looking for the next big groundbreaking event in YA? This is it.’ Rick Riordan, #1 New York Times bestselling author of the Percy Jackson series

‘Dhonielle Clayton is a whipsmart writer with grand, grand talents and the imaginative world she has created is memorable and intriguing’ Roxane Gay, New York Times bestselling author of Bad Feminist

‘Clayton dances between the fine lines of glittering, glamorous and gruesome. The Belles is a dazzling exploration of body power and identity, and a must-read for anyone looking for a lot more bite when it comes to beauty’ Roshani Chokshi, New York Times bestselling author of The Star Touched Queen and A Crown of Wishes

The Belles is available now in trade taperback, eBook and audio download. 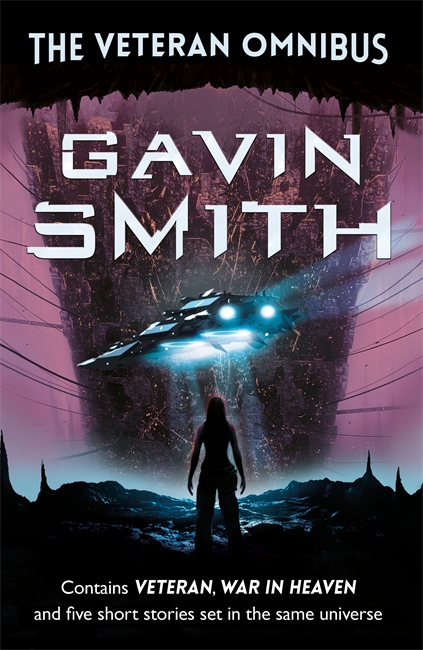 The Veteran Omnibus – Gavin Smith
An omnibus of Veteran, War in Heaven and Five Short Stories, this is hard military SF featuring a jawdroppingly vivid hell-on-earth future, a brutal war against unknowable aliens, and Jake – a harder-than-all-the-rest anti-hero it’s impossible not to love.

My name is Jakob Douglas, ex-special forces. I fought Them. Just like we’ve all been doing for 60 bloody years. But I thought my part in that was done with.

Three hundred years in our future, in a world of alien infiltrators, religious hackers, a vast convoying nation of Nomads, city sized orbital elevators, and a cyborg pirate king who believes himself to be a mythological demon Jakob is having a bad day. Veteran is a fast paced, intricately plotted violent SF Thriller set in a dark future against the backdrop of a seemingly never ending war against an unknowable and implacable alien enemy.

In War in Heaven, the high-powered sequel to Veteran, an unlikely hero makes an even more unlikely return to take the reader back into a vividly rendered bleak future. But a bleak future where there are still wonders: man travelling out into the universe, Bladerunner-esque cities hanging from the ceilings of vast caverns, aliens that we can barely comprehend.

Gavin Smith writes fast-moving, incredibly violent SF thrillers but behind the violence and the thrills lies a carefully thought out story and characters who have far more to them than first meets the eye.

Never one to avoid controversy Gavin Smith nevertheless invites you to think beyond the initial shock of what you have just read. But in the meantime? Another fire-fight, another chase another flight of imagination.
What people are saying about Gavin Smith’s books:

‘I have no hesitation in recommending Veteran, I really couldn’t put it down and the novel has left a lasting impression that will not fade for some time’ SFBook.com

‘Gavin Smith’s writing is a brutal kaleidoscope of imagination, with the raw energy of a heavy metal album cover’ Hannu Rajaniemi, author of The Quantum Thief

The Veteran Omnibus is out now, complete and fully formed, in eBook! 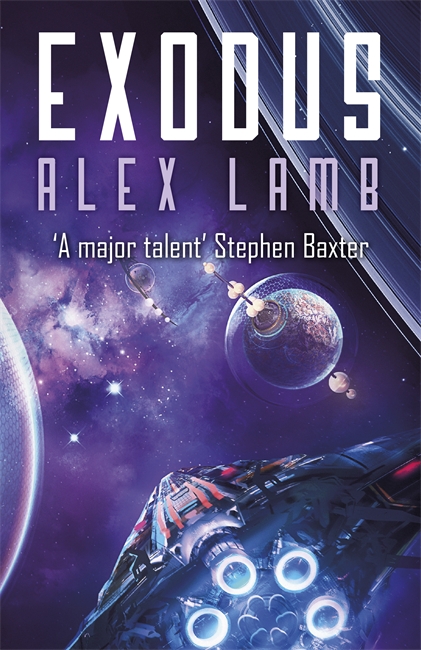 Exodus – Alex Lamb
Alex Lamb is back with the another hard SF adventure: bursting with ideas, wide in scope, Exodus delivers wide-eyed wonder in spades.

Humanity has been overrun, and has surrendered Earth. The enemy have infected us. The end is near…

The Photurians – a hivemind of sentient AIs and machines – were awakened by humanity as part of a complex political trap. But they broke free, evolved, and now the human race is almost finished. Once we spanned dozens of star systems; now only four remain, and Earth is being evacuated.

But the Photes can infect us, and among the thousands rescued from our home world may be enemy agents. Tiny colonies struggle to house the displaced. Our warships are failing. The end of humanity has come.

But on a distant planet shielded from both humanity and the Photurians, one hope may still live. The only person who might be able to intervene. The roboteer. He is trapped in a hell of his own making, and does not know he is needed. And so a desperate rescue mission is begun. But can he be reached in time? Or will he be the last remnant of humanity in the universe?

‘Exodus is full throtlle, rip-roaring space opera, with a side helping of virtual realtiy and biotech’ Popular Science

Exodus is out now in Mass Market Paperback and eBook. 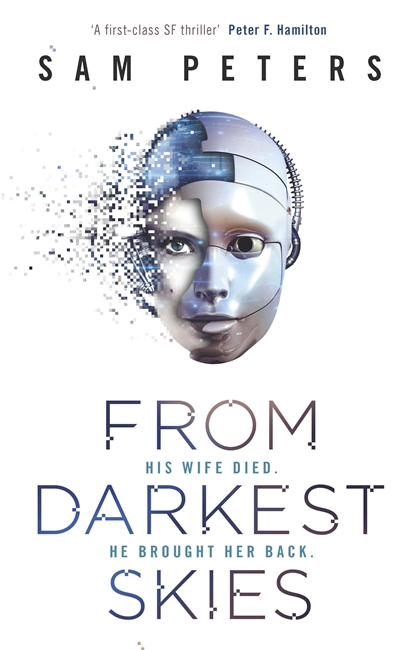 After a five year sabbatical following the tragic death of his wife and fellow agent Alysha, Keon Rause returns to the distant colony world of Magenta to resume service with the Magentan Intelligence Service. With him he brings an artificial recreation of his wife’s personality, a simulacrum built from every digital trace she left behind. She has been constructed with one purpose – to discover the truth behind her own death – but Keon’s relationship with her has grown into something more, something frighteningly dependent, something that verges on love.

Cashing in old favours, Keon uses his return to the Service to take on a series of cases that allow him and the artificial Alysha to piece together his wife’s last days. His investigations lead him inexorably along the same paths Alysha followed five years earlier, to a sinister and deadly group with an unhealthy fascination for the unknowable alien Masters; but as the wider world of Magenta is threatened with an imminent crisis, Keon finds himself in a dilemma: do his duty and stand with his team to expose a villainous crime, or sacrifice them all for the truth about his wife?

What people are saying about From Darkes Skies:

‘This is immersive SF, full of world-building detail, with a twisted love story at its heart’ Financial Times

‘A masterly piece of writing and plotting’ Joanne Harris

‘it reminded me a lot of Peter F Hamilton’s work . . . there’s the same beldn of high tech sci fi mystery focused around massive secretive corporations and the casual way human life can be terminated, tethered to a very human, emotional base. I thoroughly enjoyed it’ Fantasy Book Review

‘As with all the finest thrillers, the story is complex and intriguing, it keeps you on your toes and makes you eager to see where it goes next . . . From Darkest Skies is accessible, fast and fluid, compelling and above all thorougly enjoyable’ SFBook Reviews

From Darkest Skies is out now – available in mass market paperbook, eBook and audio download! 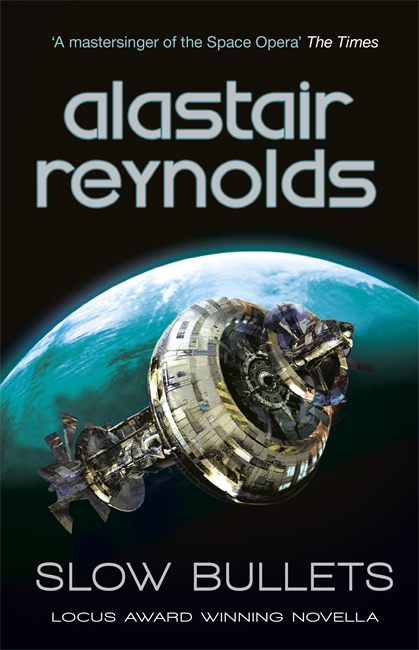 Slow Bullets – Alastair Reynolds
From the author of the Revelation Space series comes an interstellar adventure of war, identity, betrayal, and the preservation of civilization itself.

A vast conflict, one that has encompassed hundreds of worlds and solar systems, appears to be finally at an end. A conscripted soldier is beginning to consider her life after the war and the family she has left behind. But for Scur – and for humanity – peace is not to be.

On the brink of the ceasefire, Scur is captured by a renegade war criminal, and left for dead in the ruins of a bunker. She revives aboard a prisoner transport vessel. Something has gone terribly wrong with the ship.

Passengers – combatants from both sides of the war – are waking up from hibernation far too soon. Their memories, embedded in bullets, are the only links to a world which is no longer recognizable. And Scur will be reacquainted with her old enemy, but with much higher stakes than just her own life.

‘A rousing drama of revenge’ Guardian

‘Once again, Alastair Reynolds has produce a fascinating work of fiction that grips the imagination’ The Book Beard

‘A mastersinger of the Space Opera’ The Times

This powerful novella is out now in mass market paperback an eBook.

Luna: Wolf Moon – Ian McDonald
Sequel to the stunning Luna, this BSFA and Arthur C. Clarke Award-winning author returns with the second part of his stunning moon colonisation epic – perfect for fans of The Martian and Red Mars.

Corta Helio, one of the five family corporations that rule the Moon, has fallen. Its riches are divided up among its many enemies, its survivors scattered. Eighteen months have passed.

The remaining Helio children, Lucasinho and Luna, are under the protection of the powerful Asamoahs, while Robson, still reeling from witnessing his parent’s violent deaths, is now a ward – virtually a hostage – of Mackenzie Metals. And the last appointed heir, Lucas, has vanished from the surface of the moon.

Only Lady Sun, dowager of Taiyang, suspects that Lucas Corta is not dead, and – more to the point – that he is still a major player in the game. After all, Lucas always was a schemer, and even in death, he would go to any lengths to take back everything and build a new Corta Helio, more powerful than before. But Corta Helio needs allies, and to find them, the fleeing son undertakes an audacious, impossible journey – to Earth.

In an unstable lunar environment, the shifting loyalties and political machinations of each family reach the zenith of their most fertile plots as outright war between the families erupts.

And this is what people have had to say about it:

‘Luna: New Moon is a world that has been intricately woven together by it’s author. It’s compelling and thought provoking, and all without relying on overbearing sci-fi cliches. Brilliantly done’ Sci-Fi Now

‘It’s a stunning example of how good science fiction can be, and proof that McDonald is one of the best writers currently working in the genre’ SFX

‘healthily polymorphous and energetic . . . all the pleasures of a cut-throat soap opera in space: a sort of Moon-Dome Dallas’ Adam Roberts, Guardian

This gripping SF epic is available to buy now in Mass Market Paperback and eBook!