It’s Thursday, and that means it’s another publication day where we release two SF gems into the wild! Read on below for a taste of these new fantastic reads . . . 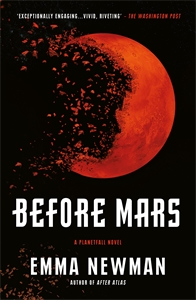 Acclaimed author Emma Newman returns to the captivating Planetfall universe with a standalone dark tale of a woman stationed on Mars who slowly starts to doubt her own memories and sanity.

After months of travel, Anna Kubrin finally arrives on Mars for her new job as a geologist and de facto artist-in-residence. Already she feels like she is losing the connection with her husband and baby at home on Earth–and she’ll be on Mars for over a year. Throwing herself into her work, she tries her best to fit in with the team.

But in her new room on the base, Anna finds a mysterious note written in her own handwriting, warning her not to trust the colony psychologist. A note she can’t remember writing. She unpacks her wedding ring, only to find it has been replaced by a fake.

Finding a footprint in a place the colony AI claims has never been visited by humans, Anna begins to suspect that her assignment isn’t as simple as she was led to believe.  Is she caught up in an elaborate corporate conspiracy, or is she actually losing her mind? Regardless of what horrors she might discover, or what they might do to her sanity, Anna has find the truth before her own mind destroys her.

And people have been brimming with praise for Emma’s work:

‘Before Mars is incredible. This is one of the best SF series I have ever encountered, every book brilliant and ingenious, everyone one different in tone and feel. I’m envious’ Adrian Tchaikovsky, author of Children of Time

‘An exceptionally engaging novel that explores the complex relationship between mythology and science . . . Surprising plot turns and richly developed characters make for a vivid, riveting read’ Washington Post on Planetfall

‘A lovely locked room mystery in which the stakes are incredibly high and the world is so very engaging . . . Emma Newman creates addictive page turners’ Starburst Magazine on After Atlas

Get this magnificent book now in trade paperback, eBook, and audio!

The sequel to From Darkest Skies, a high concept science fiction thriller 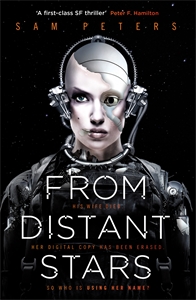 Inspector Keon has finally got over the death of his wife Alysha in a terrorist attack five years ago. The illegal AI copy of her – Liss – that he created to help him mourn has vanished, presumed destroyed. His life is back on track. But a deadly shooting in a police-guarded room in a high-security hospital threatens to ruin everything. Who got past the defences? Why did they kill the seemingly unimportant military officer who had been in a coma for weeks? And why did the scanners pick up the deceased man the next day on the other side of the planet, seemingly alive and well?

As Keon digs into the mysteries he begins to realise that the death was connected to a mysterious object, potentially alien, discovered buried in ice under the north pole. Someone has worked out what is hidden there, and what

its discovery will mean for mankind. Someone who is willing to kill.

And another player has entered the game. Someone who seems to know more about Keon than is possible.

Someone who might be using Liss’s information against him.

Or who might be Alysha, back from the dead.

What people have been saying about Sam’s brilliant books:

‘This is immersive SF, full of world-building detail, with a twisted love story at its heart’ Financial Times on From Darkest Skies

Get your copy of this thrilling read in trade paperback, and eBook now!